Sharing A Family Moment, If I May... 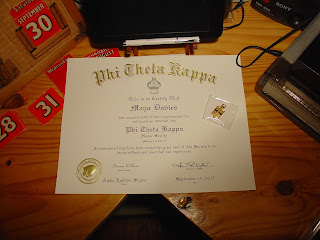 I hope that I may be forgiven for a certain amount of paternal pride in Fifth Daughter being inducted into Phi Beta Kappa...

I'm back; I'm just finishing my second week in my new position. It has been a lot of fun, and I am regaining my energy and stamina. I am very pleased with this, and so is the family - I can actually do things, after I get home!

The Daughter-In-Residence had a comics show last weekend, and then a game session with her new game group. I provided transportation and moral support - I also carried the baggage - and she had a great time.

I will not be posting until later this coming weekend; I have to help a Daughter move house, and then take another Daughter out gaming. It'll be busy, but fun, and I'll have lots more to say afterwards.

Till then, have a great time in your own games!
Posted by chirine ba kal at 11:20 PM No comments: 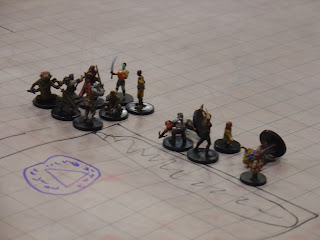 Some quick bits of personal news, then on to gaming stuff:

I am on my new work schedule starting tomorrow; I am moving back to an afternoon/evening shift, which I think will help me quite a bit. New assignments, new responsibilities, and (if I may say so) a nice raise in pay. I am expecting that my productivity will increase quite a lot; I am not a 'morning person', and being awake leter in the day will allow me to get a lot more done here at The Workbench.

We found a nice little Sony 'Cybershot' camera recently, and the photo above was taken with this. It uses the 'Memory Stick Pro' memory units, and I get something like 725 photos per stick with this camera. As a result, I think I'll be using this compact little camera for documenting games; I don't have to stop and reload sticks every 125 photos, like I do with my current digital camera.

Played in the D&D 5E campaign at the FLGS, today; this is set in the D20 "Blackmoor"series of books. We were involved in the adventures given in the suppliment "The Redwood Scar", and we managed to beat off the zombies that were menacing the village that we had been staying the night in. Had a quick side adventure from the same book, and then got the party back to the village to a place of relative safety.

I am not, I will admit, very happy with the 5e rules, but then I am not very happy with really any of the various editions of D&D that I've seen go by over the past forty years of my gaming life. I freely admit that I am spoiled by having played in the original Blackmoor setting with Dave Arneson and the original Greyhawk with Gary Gygax; their pace and ability to weave a wonderful tale really shaped the way I game and the way I look at gaming. The current incarnations of their game don;t do much for me, so I have dropped out of this group. Great players, solid GM, but all the number-crunching and calculations the rules seem to mandate are neither something I like or enjoy.

We'll see where my gaming goes, in the future; the more I get back to the basics I learned all those years ago, the more fun I and others seem to have.
Posted by chirine ba kal at 9:21 PM 5 comments:

It's been an astonishing week in my life. As you can see from the photo, Howard Fielding has come up with transparent Hokun - something that we dreamed of for years, out at Phil's. have a look - link off to the right.

Mike Burns of Dark Fable has given some hints of what he's planning for future releases, and The Missus is already rubbing her hands with glee over them. Please see his announcement in the Updates to the 'Legend of Cleopatra' Indiegogo:

Servitors of Lord Qon. anyone?

Projects on the Workbench are hitting high gear; I've been cleaning up and re-shelving in the game room and in the workshop, and a great many projects that had fallen by the wayside are back on the front burners. My energy levels are up, the tools are sharp, and the sheet goods are all earmarked for projects. Life is good, if you asked me. I'm painting again, I'm writing again, and I am enjoying myself again. Could not ask for more, really!

My gaming is also picking up; I was in a truly great 'pulp' RPG yesterday, serving as the GM's resource base, and I had immense amounts of fun. Where it looks like I'm heading is a sort of 'resource on the hoof' role, where people can use what I know and my skills to enhance their games. I'm really enjoying this; I'm also getting asked to run games for people, and that's always a lot of fun for me.

And I start my new shift a week from tomorrow, and I'm looking forward to that as well. Thnigs are really looking up, and I'm very pleased with both that and the good mood I'm in.


I think I can say that I had good holiday weekend; lots of stuff got done around the house, and many fun things were done on various excursions. The Workbench is still a mess, because I'm painting rather then cleaning, but that's my problem.

Lots and lots of family news; my father-in-law is out of the hospital and walking around (slowly, but he's walking), The Missus has had her annual cancer check-up and has passed with flying colors, Fifth Daughter has a 4.0 GPA and has been invited to join her school's Honor Society, and I am moving back to second shift in two weeks with an increase in pay. (Yes, we're a  little busy hereabouts.)

I am having a whee of a good time, in amongst the myriad of other things I'm up to, getting the plastic shield-maidens assembled. The girls are pretty happy with "their girls", as they call them. and I'm very happy at the quick and easy assembly work that I did. There are an immense number of variations possible with this set - Fifth Daughter calculated that there are over 103 million variations possible with one set of 24 figures, and I don't doubt her - so it took a little planning and forethought to get everything going - you get a lot of parts!

Fifth Daughter also did a little research and worked out the proportions of hair colors and skin tones that would likely be present in a selection of these miniature ladies, assuming that we're looking at a group of Viking Era / "Vikings" TV series / "Game of Thrones" TV series mercenaries / raiders / player-characters; it turns out that it's a 4:3:2:1 ration for black, brown, blonde, and red hair. Inside that spectrum, I also worked out several different shades of each hair color.

To add to the fun, my co-workers all encompass this same spectrum, so I was able to match hair colors to skin tones all across the range - the paints I have in stock are certainly getting a workout. I, as well as the Daughters, are very happy with the result - a bunch of very fierce and determined women from a broad spectrum of humanity. And, as a result, they all look en masse like all the extras ever hired by a motion picture or television producer for their big-budget epic.

In short, my girls are happy, my Missus is happy, so I'm happy.

By the by, I was also reviewing some of my old blog posts on miniatures, and I realized that I hadn't done the one I promised on why I get the miniatures I do, and how I paint them. So, that'll be next, with photos of examples...
Posted by chirine ba kal at 7:50 PM 5 comments: