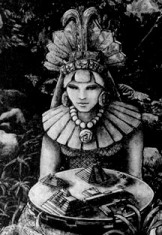 Well, here we are at the end of one year and the beginning of another. I think, when it comes time to write the histories, that 2017 will be listed as The Year Everything Changed. I had some very good moments this past year, and some truly nasty ones. We have survived, and 2018 will be known as The Year Everything Was Reborn. There have been some pretty massive paradigm shifts around here, much like the one that happened when NewTek offered their revolutionary 'Video Toaster'; we're on the raw edge of a very similar revolution in the way we do things, and I think we'll be looking at a very different history in 365 days. With your indulgence, I'd like to run through the list of what's happening here at The Workbench:

'Remote gaming': We now have the technology in hand for multiple redundant telecommunications paths into the game room. I will be able to host multiple-player RPGs online, and run my campaign games the same way. Full duplex communications, with digtial recording and playback capability, and the ability to upload programming to the Internet for wider viewing.

'Campaign Gaming': I will no longer be doing 'one off' games here at the house. I will be running my campaign games instead, and these will generate the on-table activities. I am hoping to be able to run multiple campaigns, each set in the genres and world-settings I support; interested players will get the information that they can discover, and make their moves from there. Primary inputs will be by e-mail; output will be by Internet video teleconferences.

'Projects': I will be finishing my book, "To Serve The Petal Throne", this year, and players in the Tekumel campaign will be able to participate in the events in the book as it's my intention to illustrate the stories with photos of our vintage figures in game play. This will also lead to the completion of the second edition of my miniatures rules, which will also be profusely illustrated with photos, and which players in my campaigns will be able to play-test along with me.

'Miniatures': I will be 'combing out' the primary Tekumel collection of miniatures to remove any non-Tekumel figures added since 1988. These figures were originally purchased as 'stand-in' figures for items that were not available at the time or since, and have been made redundant by recent developments. In most cases, they will move over into the other genres and world-settings that I support; in a few cases, where they do not fit in with our current and future plans and objectives, they'll be removed from the collections, declared surplus to requirements, and disposed of. A similar process will be used in the scenic and terrain collections.

While this all sounds pretty drastic, we're simply recognizing the current realities of the game hobby. It is very difficult to get campaign-minded players here locally, so we're moving away from what we've had as a local emphasis to a much broader and wider one. People here in town generally have no idea who Dave and Gary were - let alone Phil! - and so we're moving our efforts into a universe where they are still remembered.

So, out with the Old Year, and in with the New! Happy Holiday, everyone! :)
Posted by chirine ba kal at 7:21 PM