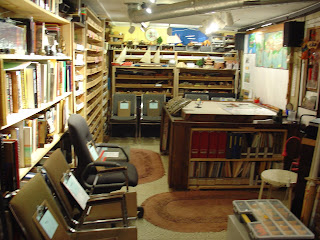 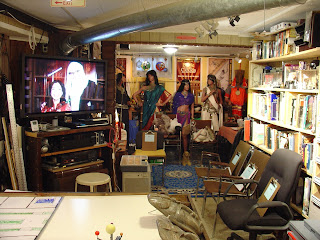 It may not be opulent luxury, but it's our home...

We're off and running!
Posted by chirine ba kal at 10:52 AM No comments:

The renovations in the game room and lounge continue; I have four days of vacation this week, and I'm slowly starting to get caught up on all the things I've been wanting to do in the basement and around the house. Lots of other stuff going on, and I'll have more news later on.

The furniture has all been moved, and the space created has been used to get some of the costume collection on the mannequins organized so that they take up less of a footprint in the game lounge.

(Yes, that's sort of a a joke about all the fiberglass feet I've been dealing with.)

Six of the currently displayed costumes are now along the shelves on the south wall, with The Missus' Ksarul armor holding the fort on the west wall, on the opposite end of the buffet table from dear old Chirine. Mannequins in armor are a right royal pain to move, even on the nylon furniture sliders I have on their base, because they are very top-heavy and not at all well-balanced. Four of our fiberglass people are in storage, simply for lack of display space.

And in a very unexpected development, one of the mannequins we got this past year as part of a bulk lot and which was  missing her right arm, had it found by the folks we'd bought the set from; so, we now have a new costume to build. Given the bales of sari fabric sent to us from Europe by Fourth Daughter and the new bales from The Missus, I think we can manage...

One of the new features of the game room proper is a rack by the corner of the table with sets of green, yellow, and red cards. This is a development of the 'X card' that has been talked about in various on-line gaming circles, with some pretty wildly varying opinions. Some people seem to have the opinion that these kinds of cards are an infringement on their creativity and are a form of censorship.

I disagree. I look at them as a backstop / insurance policy for my games. Tekumel has, shall we say, a bit of a 'reputation' for having 'mature themes' present in the world setting. That may be true, especially in the context of the 1975 publishing era, but these days 'lesbian' is not a foreign word for most gamers. So, I don't think that a lot of the 'edgy', 'adult content' we first saw in EPT will be all that difficult for modern gamers.

Do I think these cards will be needed?

No, I don't; back in Ye Olden Dayes, our play style was a lot different then what I see on-line and in the FLGS. I've seen games where I have seriously wondered if I'm old enough to be listening to that particular game session, or wondered why the subject matter would even come up at the table - or, for that matter, what ever happened to 'good taste'.

I didn't game that way, we didn't game that way out at Phil's, and my new group will not be gaming that way in our adventures. This is all about a bunch of friends sitting around a table having fun, and this ancient dinosaur thinks that it's only polite to have this kind of back-up at the table for my friends.

I'll let you know how it all works out, of course.

Posted by chirine ba kal at 9:30 PM No comments:

Reconstructing The Game Room - to handle the crowds!


This may not be the longest update that I've done, but it's possibly of interest to people. We tested some of the PCs we have in the game room yesterday, as we gear up for video calls via Skype or Google hangouts. The second-hand Dell failed to power up, but the equally second-hand Hewlett-Packard did, and we were able to test the camera that we got with the Dell.  Speed was slow, due to the USB port in the HP being not the high-speed one that the camera prefers, but so it goes; we have a tech on call to look at the Dell. Either way, things are moving forward.

I've been doing a bit of thinking - you can hear the gears clashing - and we're going to have a week off a week from today to get a lot of the domestic 'to-do' list done in time for winter. We're finally getting out to the garden sheds to clean up the wreckage from several month's solid game sessions, and getting the workshop finally cleaned up after a decade of 'mend-and-make-do'; the goal is to get it cleared out enough to be able to have guests in there to work on things. This stems from a request from various members of the new game group to have a place to work, on the nights when we don't have enough people t play and nobody wants to watch a movie.

However, since I do have a spare 52" plasma screen, we'll mount that on the wall in the workshop so we can have our painting nights and our movies too. The spare 42" LCD will stay as our 'mobile reserve', as it is the lightest of all our big screens and was originally bought for use at conventions.

Speaking of which, in a surprise move The Missus is getting her own vehicle - a mid-size pick-up truck. She likes these, and her brother has a spare that she's getting. This means that the elderly Astro, with it's 339,000 (!) miles on the odometer, will revert to being my cargo vehicle and kept in reserve for possible convention trips. It will, as we've noted in these pages, not be our main transport - the Bug and the new pick-up will be - but the van is paid for and all we have to do is keep the insurance paid for the and the oil topped up. It does run reliably, these days, and we'll keep it around for as long as we can.

In other news, TRE Games has some new 28mm kits of Japanese buildings and bridges, and we are sorely tempted to add to our urban collection with these. I usually associate Tekumel with more Middle Eastern styles of architecture, but we shall see if we can't get some research done in the archives; Phil once remarked that the Salarvyani like a more ornate and complex style, so maybe there's hope yet. The kits are really nice.

That's what I have tonight; more later...
Posted by chirine ba kal at 11:46 PM No comments:

Dear Phil: You Are Not Going to Believe This! - The Weekly Update - Monday, September 3rd, 2018

It's been an amazing month since I got back from Alabama. I talked about you and your creation from the time I got in to the time I left, and the response from people was simply amazing. Just like what happened at the 'Free RPG Day' event, folks were utterly fascinated by your world and wanted to know as much about it as they could. Your novels are enjoying a revival, and I'm very pleased by that; so are used book dealers, who are having to ship your novels out as fast as they can find them. All to the good, I say! I'm being asked about the Subtle Hints and Easter Eggs you left, and it's been a lot of fun telling people about our adventures.

The players in the 'Free RPG Day' game asked me to run a Tekumel-based campaign for them, and we've gotten that set up. Much to my astonishment, I've gotten interest from a lot more people then the basement can hold - shades of our days around your Ping-Pong ball table! - and so I've opened up a 'second front' for the campaign on a different day. I'm back my mu old 'week on, week off' schedule of game sessions and build sessions, and I am really looking forward to this - I've always worked better and more productively on a tighter turn-around like this, and I'm already seen a massive increase in my own productivity. The Missus is also enjoying it, as she now gets to demonstrate her perfections as a hostess, and she loves that the house is once again full of life and laughter.

You'd love Waffle The Wonder Dog, Phil, as she's every bit the complete and utter ham that Anubis The Wonder Dog was during our game sessions and a worthy successor to the title.

I'll be continuing this blog, as a way of talking about the more complex and recondite subjects - I still have to get our version of Gary's 'Appendix N' up, as an example, but I think you'll be both happy and amazed that people looking in at this little confection about the games we played have tripled; I came back from Alabama to find that we'd had over 650 hits on that Sunday, and we're still over 200 a day.

The threads on the RPGsite forum, I should mention, collected over 910,000 views in the two years we were on there, and went to something like 900 pages of posts and replies.

The new Proboards.com forum, http://chirinebakal.proboards.com/ , has really taken off; in the month that it's been up,  we've been getting an average of over 500 'views' a day, and almost forty people have become members on the forum. I'm amazed by that, as it's all been by word-of-mouth, and I think it shows that your creation still has the power to amaze and fascinate people. I am, I think, pretty sure it isn't my doing, as I think that the excellence of your work speaks for itself and is what is carrying us along.

Me(as I used to say), I just paint the figures. Which have also been pretty wonderful. Howard and The Tekumel Project keeps going from strength to strength, and The Missus keeps finding figures that she is pretty sure you'd like - the new ones from Dark Fable reminded her of you, as the lovely little dancing girl who's one of the stretch goals is the twin sister of the dancer you carved something like sixty years ago.

Life is busy, Phil, but you and your creation are being appreciated a whole lot more then may have been the case in the past.

The Flame Lives, Phil, and we'll keep doing our best to keep it burning.

- chirine
Posted by chirine ba kal at 4:35 PM No comments: