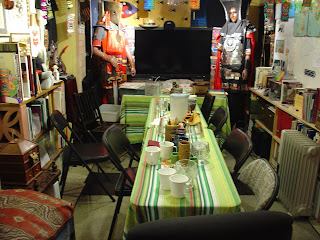 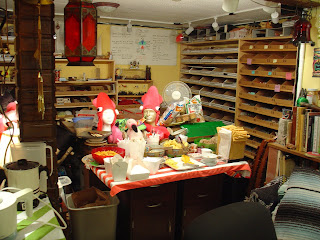 The tradition, back in the day, was for a bunch of friends to get together at somebody's house for a game and some fun. I think we managed to continue that tradition, yesterday.

The Effect Of Weather On Gaming - The Logistics Issue

More, actually, now that most of my gaming take place here at the House of Wonders. (1)

The sheer agony of moving out of the basement and into the transport vehicles during the winter makes gaming outside the basement a sheer pain in the tush. The shed out back where most of my 'large game stuff' lives in their transport tubs was buried by three-foot-high snow drifts this winter, and I jus got into the shed yesterday to get out the decor for this weekend's Tsolyani New Year's Party & Game Session. (2)

There are three conventions in the February - March period (Con of the North, MarsCon, and Gary Con)and since I have to book my time off well in advance and make the hotel reservations and do the event registrations a year out, it's a crap shoot betting on my being able to actually get to the convention. Likewise, getting to the local game venues is just as difficult; my style of Big Miniatures / Big Braunsteins means that doing a game at the game shop five minutes from the house is just as much logistical work as doing Gary Con in Lake Geneva. The only difference in the trips is the time I'm on the road, and that gets old in the winter when you're driving for any length of time.

It's been suggested that I should / need / must change my style of gaming to that of the folks at the game stores, where it's a battle mat and a couple of pre-painted figures. My kind of game, where you have a 120" x 60" table covered with scenery like the ones I did for the Shieldmaidens, is most assuredly not that kind of gaming. I certainly don't mind or denigrate what I consider a sort of 'minimalist' / 'theater of the mind' kind of game - it's just not what I like or what I like to run for people.

Redoing the basement game room ha really made a huge difference in my gaming; I can now have ten people in for a big game like the one we just had - photos and report forthcoming! - without having to book the venue, make all the reservations, handle the catering, and haul everything up out of the basement and out of the shed while freezing my fingers off.

Yes, winter does get old, up here in the North Woods. But is has made for better and more frequent gaming.


Footnote (1): The Shieldmaidens have taken to calling our house the 'House of Wonders' because of all the cool stuff stashed away in the odd corners. I'll take that, and we're getting a nameplate engraved.

Footnote (2): Traditionally, I've held a Tsolyani New Year's party the first game session after the spring equinox, to mark the change in phil's Long Count of years. Since I now have two game groups, the decor will stay up for both. I'd like to think Phil would have approved. There will be cake, or some sort of treats.
Posted by chirine ba kal at 7:13 PM 1 comment:

A Better Answer For Desert Scribe On Rules 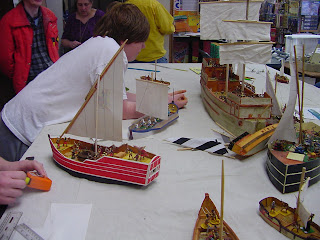 Hi Chirine! So are you using the same rules for this sea battle that you used for the Longest Day scenario you ran last time, or do you switch rules to better suit the narrative (i.e. zoom in to individual characters or zoom out to a larger battle as needed)?

First off, thanks for your patience; this is the first quiet weekend we've had in a while. Between the snow, the cold, and the problems with the van, it's been exhausting. The van is now gone; it was unloaded, stripped of anything of use to us, and sold for scrap / parts last weekend. I do miss the old beast, but we did get our money's worth out of it...

The attack on the little town by the pirate raiders was pretty much a straight one-on-one RPG, with the addition of "Chainmail" / "Qadardalikoi" morale rules for the pirates. The problem withs game, from my point-of-view, was that I had to both run the game and run the pirates; I prefer to have live opponents, but in this case the poor weather that day meant that we had to run with what we had.

So, every turn I'd roll for initiative for each of the four shiploads of pirates, and their reactions to what the players were doing. As the melee progressed, and casualties started to mount, this was also factored into the dice rolls. Eventually, the surviving pirates broke and ran for their ships, leaving the players in command of the field. (And a mess to clean up, but there you are.)

The upcoming sea fight will, as you put it, 'zoom out/ a bit to treat the individual ships as 'PCs', and the individual Akho the same. This will make for a short sharp action; getting individual melees going will really slow down the action, and as this is a pretty large 'mass game' I'd like to avoind that. If this was a 'straight RPG', I'd 'zoom back in' and put out the ships or deck plans and use the 'man-to-man' rules for the fighting.

This game is going to be all about sinking ships / killing Akho, so I'm going to use pretty minimalist rules for sailing and melee; I don't know if the players have done much of this kind of thing before, so I'm erring on the 'keep it simple' side. Simple rules, turning circle templates, that kind of thing. I also mounted my 2' x 4' piece of dry-erase board onto the wall in the miniatures room, and the short and sweet rules are all now written on that for players to look up at.

So, yes, I think the answer to your question is that I do indeed zoom in and out the rules to match the size of the action. In a large-scale battle, it's be "Chainmail" or "Qadardalikoi", or something similar. I don't have a set or actual game rules for mass naval actions like this that I like, and certainly none that I'd want to saddle my players with. So, we'll keep this as simple as possible, and let the players loose on the water.