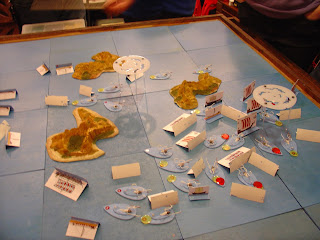 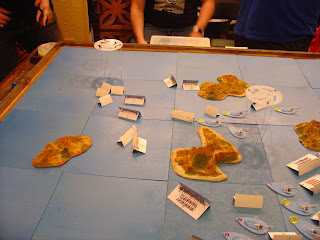 Lots of ships got sunk; about half the pirate fleet got off the board, and about a third of the Akho took damage of one kind or another. No clouds were harmed in the making of this game.

All in all, I was very pleased with this game. People had fun playing in it, and I had a lot of fun setting it up and running it. 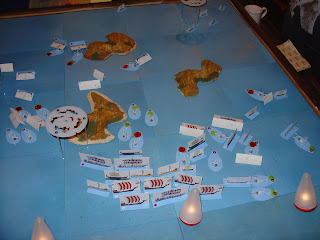 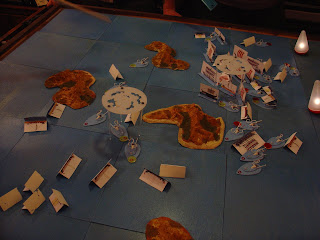 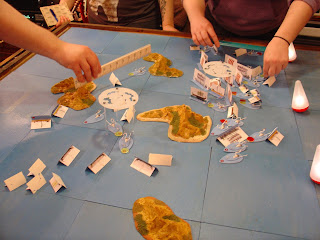 Posted by chirine ba kal at 4:17 PM No comments: 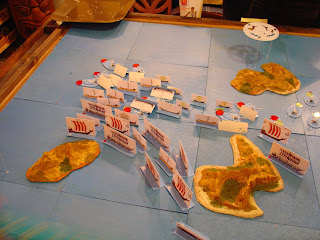 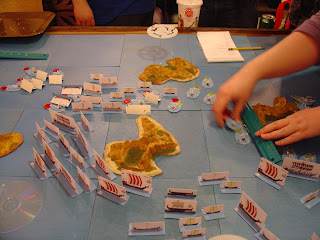 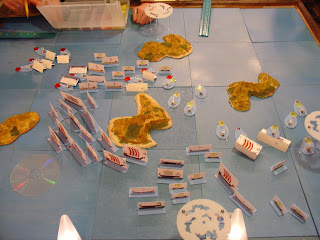 Posted by chirine ba kal at 4:12 PM No comments: 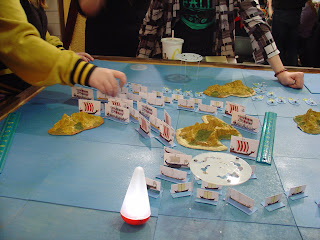 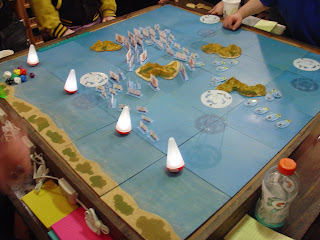 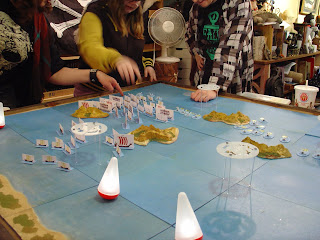 Posted by chirine ba kal at 4:06 PM No comments:

The Haida Pakallans vs. The Akho - 1 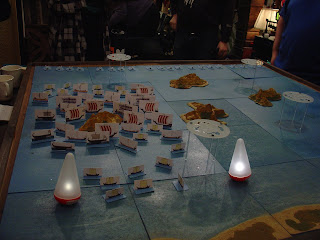 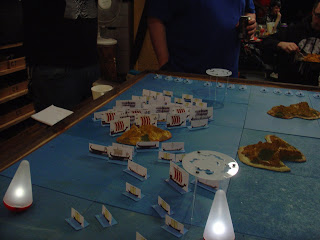 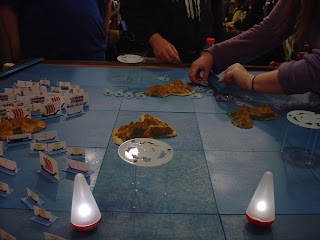 The story behind this fight is that one of the players made a comment to the effect that it would be fun to actually play out the battle between the pirate fleet and the Akho. In the best Dave Arneson tradition, we did.

Any student of naval warfare would instantly recognize this as a prime example of the Jeune Ecole school of naval strategy, with the Haida Pakallans playing the role of Queen Victoria's Royal Navy and the Akhon the role of the French Republic's torpedo boats.

The pirates enter on the north side of the table and have to get the majority of their fleet off the south side. The Akho enter from the east side of the table. Both sides need to watch out for the shoal waters near the shore, thoughtfully marked out by lit buoys from IKEA provided by Yours Truly. The round templates are clouds, and move with the wind.

The pirates are being played by four of the Fourth Sunday group, and the Akho by the five members of the Second Sunday group.
Posted by chirine ba kal at 3:55 PM 2 comments:

Out of the depths and into the light - Two steps forward, one step back...


My apologies for being off the air for so long; it's been a pretty poor month in my gaming life. The actual gaming has been really grand, with both game groups really getting into their groove and into Tekumel. It's the external stuff that has really gotten me down, and I'll avoid burdening you with it.

Suffice it to say that the New Year's game sessions have been a success, and the Tiki decorations will go back into storage for another year.

We'll be back this week with our regular programming, including the photos from the sea fight.

Thanks for your patience!