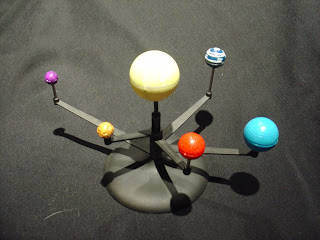 Nearly forty years ago, Prof. M. A. R. Barker created one of his most memorable non-player characters: the Priestess of Mretten, Si N’te. She very quickly developed a personality all her own, despite her creator’s best efforts, and became a very real person to all of us who played in Phil’s Tekumel.

She’s had her share of adventures; she’s collected four wives – Kiya, Tsahul, Nyssa, and Fishface; one husband – Chirine; and a host of children along the way - two, the twins Kashi and Gayel, are her own, and the rest – Sitre, Menwe, Ten’er, Mridan, Takhmet, Takhmin, Aliya, Sirin, and Djel have all come to her on the winds of fate and been welcomed into her family.

The harbor and the skies over the palace have been filled with great ships arriving for this day, and bearing her guests to her home. Captain Harchar’s “Splendor of the Gods” rides at anchor, the “Prince Ahmed” out of Basra is tied up at the quay, and a great skyship flying the colors of the twin towers of Helium pivots into the wind while at hover. Gay Deceiver and her sister Dora sit on their landing pads on the Legion of the All-Consuming Flame’s parade ground, along with the flying sphere of Turshamu the Undying Wizard and the gleaming silver ovoid of an intra-system ship of the Ancients.

Her guests have names like Fafherd, Kimball Kinnison, Lapis Lazuli, John Carter, Hisvet, Ozma, Lorelei Lee,  Dejah Thoris, and the Grey Mouser. For this day, the barriers that separate the 772 worlds of the Multiverse have been sundered, and the old palace is filled with the life and laughter of them all.

The great plaza that lies in front of the old Engsvanyali palace that now serves her and her family has been cleared. Five mosaic rings, in different colors, had been set into the pavement in ancient times, with a solid round spot – done in bright gold – in the exact center. The plaza was ringed by an expectant crowd, all of whom fell silent when the drummers in their crimson tunics embroidered with a great leaping golden dragon began to sound a marching beat.

Two companies of elite solders, the Black Guard – composed entirely of male beings – and the White Guard – composed entirely of female beings – march out of the old palace’s gates, down the steps to the plaza, and form up in ranks across the front of the palace. They re followed by Lord Chirine’s bodyguard; six troopers of the Legion of the All-Consuming Flame; they are not the very best soldiers of the Legion, as one might expect – they are, instead, the despair of their officers. But, they are the very best warriors that the Legion has in the ranks.
The drums continue; from out of the tall double gates, armored in buffed and polished armor, comes Lord Chirine himself ; he is what he is, the commanding general of his legion, and a mighty and powerful sorcerer. He goes to the golden spot in the center of the plaza, and waits.

The drums fall silent. A single flute begins a tune, and one by one Their Ladyships, Si N’te and her wives, spiral out to the five circles set into the pavement. Each takes a color; she herself takes the blue circle, and as more flutes and conch-shell horns take up the melody she is joined by her two twins, who each circle around her in opposite directions like their namesakes do in Tekumel’s sky.

It is the night of The Circle Dance, sacred to the Goddess Mretten, and the dance is being danced by the Goddess’ own First Dancer, Lady Si n’te with her family. As the last of the sun touches the horizon, her husband raises his hands and the plaza is illuminated by his sorcery. Their Ladyships and the twins spiral away, leaving Chirine and Si N’te alone and together in the plaza as then have been for nearly forty years of action, adventure, and romance.

Chirine lets his spell fade, and the night’s revelry begins.

Thank you Phil, for the world that you gave us and the adventures we had with you in it…

A Look Around The Table 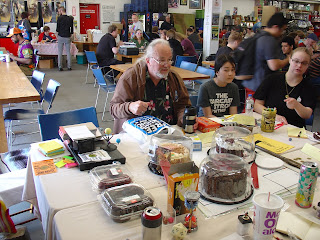 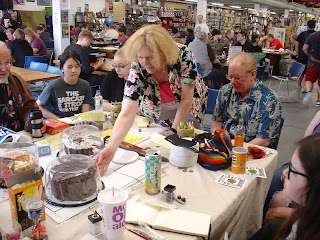 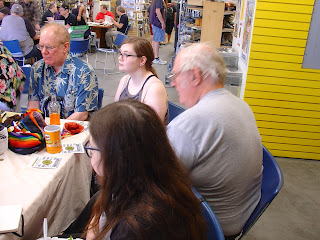 A moment in time during the 'Free RPG Day' game, when we were in one of the many 'cake breaks' in a valiant attempt by the party to Do Something about all that cake I'd gotten in a midnight raid on the grocery store.

Going around the table: The Glorious General, a Sacred Cat of Bast, a Librarian, a Lady-in-Waiting, a dodgy Yan Koryani nobleman (we think; he's kinda vague about his past), a Nlyss mercenary (the famous Murr dir Oboe, no less!!!), some guy who popped out of a telephone booth and says he's a Physician (Personally, I think he needed to get his washing machine fixed, as it made all sorts of terrible noises), and our very own Vampire Real Estate Agent.

A lot of other people showed up, too, but I was so busy I forgot to take pictures...
Posted by chirine ba kal at 2:46 PM 5 comments:

Seventh Daughter, All Tanked Up 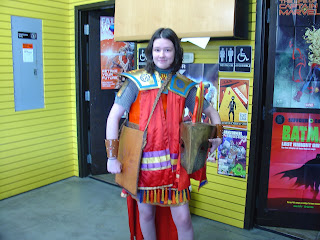 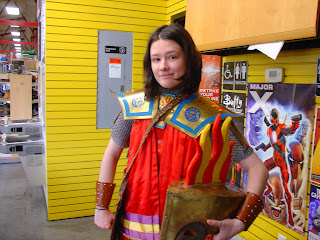 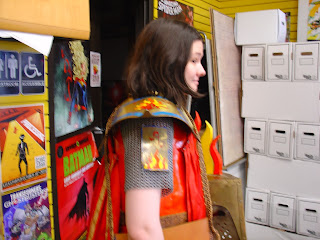 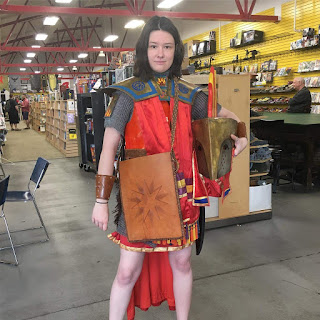 Yep, the rumors are true. I have two new Daughters, the Sixth and Seventh of that ilk. Seventh Daughter flew in from out of town for the 'Free RPG Day' game and the associated festivities, and allowed that she had had a great time.

"Living the dream!" she said.

She also allowed that she'd like to wear Dad's armor (Wasn't that a British sit-com, back in the day?) soe we got her all suited up and she wore the 38 pounds of steel and leather for the next five hours to great acclaim. I made sure that her citizenship papers and writs were in her dispatch case...

This was a pretty amazing moment; Chirine hasn't been worn by anybody since he was shown off at the WorldCon in 1988. Seemed like a good idea to get him off his mannequin, dust lightly, and get a Priestess of Vimuhla all suited up...

Free RPG Day Has been Survived! 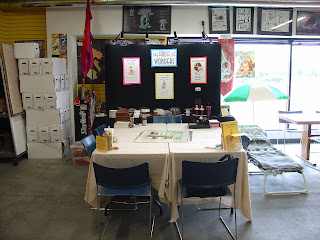 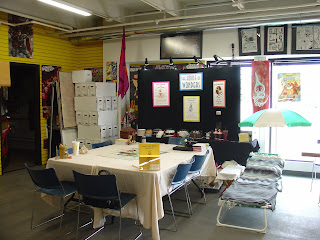 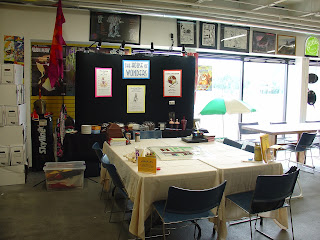 Three views of our little corner of the game store. The chaise lounge was for one of our players who had a bad fall and suffered a concussion. She came and played anyway; you just can't keep those Shieldmaidens down!

Twenty-one players, nine hours of continual gaming, twelve pounds of assorted cake, thirty-four dollars on the drinks tab I had with the store, one hundred and twenty flyers distributed, thirty-eight business cards handed out, and uncounted laughter.

It's been a long and very busy five weeks leading up to this event, but we're getting back to normal around here. More to come... :)

Posted by chirine ba kal at 2:22 PM No comments: